A new book on pretrial advocacy, published this week by the National Institute for Trial Advocacy (NITA) and Wolters Kluwer, takes on a world of litigation that has been radically transformed in recent years by remote proceedings and other practice norms that often deliver resolution long before litigants face off in the courtroom (available in print and e-book here).

In Pretrial Advocacy, authors Reuben A. Guttman and J.C. Lore address the challenges of litigating in a civil justice system that is overburdened yet essential to implementation of the rule of law. Even as nearly 90% of all civil matters never come before a jury, lawyers must nevertheless prepare cases as though they will. Because modern civil litigation is, the authors say, “front loaded,” lawyers are challenged early on in the pretrial process to consider the rules of evidence and civil procedure as they gather information to plead a plausible complaint.

“The pretrial process is laden with unwritten norms. All parties, from litigants to jurists, struggle to provide efficient resolutions while balancing due process,” said Lore, a Distinguished Clinical professor and Director of Trial Advocacy at Rutgers Law School. “We wanted to write something that explains it all.” The strategies and techniques outlined in Pretrial Advocacy put forward responsive new approaches to teaching advocacy in both law school and continuing legal education settings.

In addition to practical tips and insights from some of the nation’s foremost jurists and practitioners, Pretrial Advocacy features a foreword by retired U.S. District Court Judge for the District of Massachusetts and Harvard Law faculty member Nancy Gertner. “Pretrial Advocacy fills an important space for litigators,” Gertner said. “It teaches how to try cases from the moment  a client contacts the lawyer through the trial, encouraging lawyers to engage in strategic decisions about pretrial discovery and motion practice. Why depose this witness rather than another?  What is the purpose? What are the salient documents—not every single one, not just the few ‘gotcha’ documents, but those that build the narrative.”

Pretrial Advocacy closes with chapter dedicated to public interest litigation. “We thought a chapter on public interest litigation was necessary because there are too many people—from immigrants to victims of race and gender discrimination and whistleblowers—seeking to have their voice heard, and they need competent representation,” said Guttman. Guttman is a founding partner of the Washington, D.C. law firm of Guttman, Buschner & Brooks, PLLC, where he has represented clients in False Claims cases in matters returning more than $6 billion to the United States government.

Guttman and Lore are available to the media to comment on matters in civil litigation and the civil justice system. 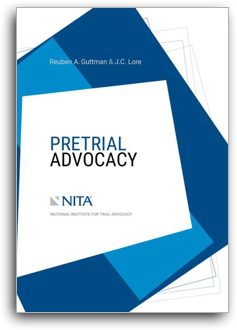 Pretrial Advocacy is the ideal textbook for law school clinics, law school  pretrial litigation courses, and practicing lawyers. Both practical and theoretical, it teaches litigation as a process informed by rules and cases, but also by strategic considerations. Its hands-on and accessible text makes it a perfect reference for learning skills and a continuing reference. (Available in print and e-book here.)

Reuben Guttman and J.C. Lore discuss their new book, Pretrial Advocacy, and why modern litigation practices necessitate early, close attention from practitioners. They discuss the interplay of early discovery with the Federal Rules of Evidence and Civil Procedure, how law schools are responding to “front-loaded” litigation that often results in fewer jury trials, why public interest law matters, and what’s exciting about pretrial.

Pretrial Advocacy is the ideal textbook for law school clinics, law school  pretrial litigation courses, and practicing lawyers. Both practical and theoretical, it teaches litigation as a process informed by rules and cases, but also by strategic considerations. Its hands-on and accessible text makes it a perfect reference for learning skills and a continuing reference. Available in print and e-book here.

Firm founding partner, Reuben Guttman, has co-authored a text on pretrial advocacy with Rutgers Law School Distinguished Professor, JC Lore. The text is published by Wolters Kluwer and the National Institute for Trial Advocacy and is geared to practicing lawyers and law students.

Ninety percent of all civil cases never make it the jury; they are resolved through a pretrial process that is today the unsung forum for dispute resolution. Rather than teaching lawyers to abandon evidence and trial skills, Pretrial Advocacy does the opposite; it teaches lawyers that modern litigation is “front loaded” and cases must be prepared with the assumption that they will be tried. As the authors note, it is the rigor of the pretrial process that drives resolution. From the first client interview through motions practice, you will learn to effectively evaluate cases, draft complaints, conduct informal and formal discovery, prepare and respond to motions, negotiate with opposing counsel, and, if necessary, be ready for trial.

Pretrial Advocacy is the ideal textbook for law school clinics, law school pretrial litigation courses, and practicing lawyers. Both practical and theoretical, it teaches litigation as a process informed by rules and cases, but also by strategic considerations. Its hands-on and accessible text makes it a perfect reference for learning skills and a continuing reference. (Available in print and e-book here.)

Professors and students will benefit from:

Available in print and e-book here.

LOUISVILLE, Colo. — The National Institute for Trial Advocacy’s (NITA) held a virtual discussion of the delivery of legal representation for members of vulnerable groups in its National Town Hall on Access to Justice for the Vulnerable. The town hall was record on July 21st and is now available to watch on demand. It is free of charge to registrants.

In May, President Biden signed a Presidential Memorandum to advance access to justice and the legal system to our society’s most vulnerable individuals. In response to this call for action, NITA has organized the 90-minute town hall in which Reuben Guttman, a whistleblower attorney with the D.C. firm of Guttman, Buschner, & Brooks, will moderate a panel composed of members of the judiciary, bar, and academy. The panel will discuss the aspirations and challenges in ensuring that every American, no matter their resources, can have their day in court, and with well-trained counsel at their side.

Among the panelists are Jo-Carol Nesset-Sale, who as a plaintiff saw her pregnancy discrimination case taken before the U.S. Supreme Court in a landmark case decided in 1974, and Serena Nunn, who received a pardon from President Obama in 2016 after a controversial mandatory minimum sentencing in a drug crime in 1989. These experiences led each woman to become a lawyer and represent the voiceless and vulnerable.

“At a time when daily events remind us that equal access to justice is not a given for everyone, this national conversation will bring lawyers and jurists together with a goal of exposing needs and developing recommendations that will make our judicial system more accessible and just for all,” said NITA Executive Director Wendy McCormack.

Joseph Krakora (New Jersey State Office of the Public Defender), J.C. Lore (Rutgers Law School), Hon. Michael Noble (Missouri Judicial Circuit Court), Hon. Sam Sheldon (U.S. District & Bankruptcy Court), and Whitney Untiedt (Freidin Brown) round out the panel to bring their unique perspectives on how to level the playing field for all who find themselves on it. A live Q&A session will follow the presentation. The presentation will be recorded and available for on-demand viewing.

A small team of law students from Rutgers Law School, The University of Arizona James E. Rogers College of Law, and Penn State Law—Thomas Reilly and Anthony Sole of Rutgers Law, Rachel Romaniuk and Melissa Zeid of Arizona Law, and Nina Franco of Penn State—are producing a whitepaper based on the proceedings. “It is fitting that law students from Rutgers, Arizona, and Penn State will be using this national dialogue to draft a paper which outlines access to justice issue and solutions,” Guttman said. “Our dialogue is in some measure about setting the course for our judicial system over the next generation.” The whitepaper will be available on NITA’s website in August.

Untiedt, a trial attorney and member of NITA’s Board of Trustees, said, “It’s time to stop thinking about ‘access to justice’ in the abstract. Lawyers, judges, law professors, and students preparing to enter the practice need to understand the humanity of our system: each person who walks into the courtroom has a name, a life story, and a future that will be shaped by the decisions that will be made in that room. Until our system—along with those run it—is centered on the people it affects, it can never truly be just.”

The National Institute for Trial Advocacy is the world’s leader in advocacy skills training and publications. A 501(c)(3) not-for-profit organization based in Louisville, Colorado, NITA is a service organization made up of a volunteer network of lawyers, judges, and esteemed academics across the globe whose mission is to train and mentor lawyers to be competent and ethical advocates in the pursuit of justice. To learn more, visit nita.org, or call us at (303) 953.6828.

GBB served as co lead counsel in a class action law suit whose partial resolution will lead to the testing of 20,000 inmates in South Carolina for Hepatitis C. This is a major step toward eradicating … END_OF_DOCUMENT_TOKEN_TO_BE_REPLACED