American law schools are in trouble. I represent whistleblowers and ferret-out fraud for a living; I sense that something is very wrong in the world of legal education and a mere scan of cyberspace validates some of my concerns.

Start with Twitter and internet pop up ads. These are the cyber-bazaars where degree programs are hawked; and this degree advertising is no longer just the province of for-profit colleges looking to make a buck off students who can snag US Government-backed loans.

Law schools affiliated with seemingly reputable universities are taking to the internet to advertise degree programs that do not come close to enabling the practice of law.

Once thought of as specialized degrees for law graduates entering a technical area or students contemplating academia, LLMs are now being sold by the fistful to foreign students who will pay full freight.

To expand their output, US law schools are making many of these opportunities available online while waiving testing requirements to incentivize the flow of applications. And to service the new crop of students, many law schools are resorting to adjunct or contract faculty, leaving tenured faculty to concentrate on research and selected teaching. At the end of the day, students seeking a quality education from a branded institution are getting something akin to the second tier product of an outlet store.

What is driving all this is undoubtedly the need to grab the cash necessary to compete for US News rankings. And why is there a need for cash? It is simple, with the US News focus on JD programs, law schools need to recruit students with high GPAs and LSATs, which are the currency to get the rankings; and it is the scholarship money that lures the students to the classroom. The spending on students — too many of whom aren’t even in financial need — is something akin to the baseball free agent market.

Unfortunately, the truly top law schools are most likely to get the students with the deepest potential. This leaves lower-tiered schools left to bid for those students whose claim to accomplishment is statistics; indeed statistics without regard to college major, the rigor of the undergraduate institution, or the challenges that the student had to overcome in making it through college.

The truth is that too many law schools are turning themselves upside down and inside out to meet the criteria set by a for-profit magazine that calls itself US News but which actually no longer reports the news.

Placed in context, we live in an era where we relish competition and the data that comes with it. Our nation’s law deans are participating in a competition that is as obsessive to them as realty TV is to the millions of Americans who tuned into “The Apprentice.” The problem is that, with this rating chase, more than a few law schools are turning themselves into academic Ponzi schemes. Money brought in from these newfangled degree endeavors and online programs are being channeled to buy JD candidates with the “right stats.”

The system now favors well-heeled applicants with the financial backing to take LSAT review courses and who have never had to work through college, leaving them time to concentrate on course work. It discriminates against those who may be first in their family to go to college, worked through school, and scrounged together the dollars necessary for a college education. And it is a system that punishes the student who endeavored to push their intellect to the edge with challenging classes; perhaps including those in math and science.

Step back and think about it; our entire system of legal education and how schools award scholarship money is being crafted by ratings profiteers. Placed in perspective, we now have a President who was elected because a TV network anointed him the god of business management and 63 million voters were led to believe it to be true. And how is that going for us?

I could be wrong about this and so I have checked my concerns with colleagues who are law deans, law school administrators, or professors. In my informal outreach I could not find a single member of legal academia who said something positive about the US News rankings. The problem, of course, is that I have failed to find anyone who is willing to take on this ratings system which is both discriminatory and interferes with the task of educating future custodians of the rule of law.

Yet, as historians know all too well, there is often the day when someone wakes up and challenges practices that are well accepted but fundamentally wrong. In these perilous times, I hope that sooner rather than later there is an awakening to our perilous state of American legal education. 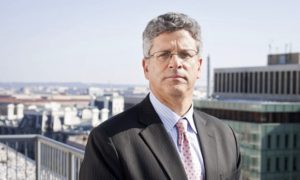